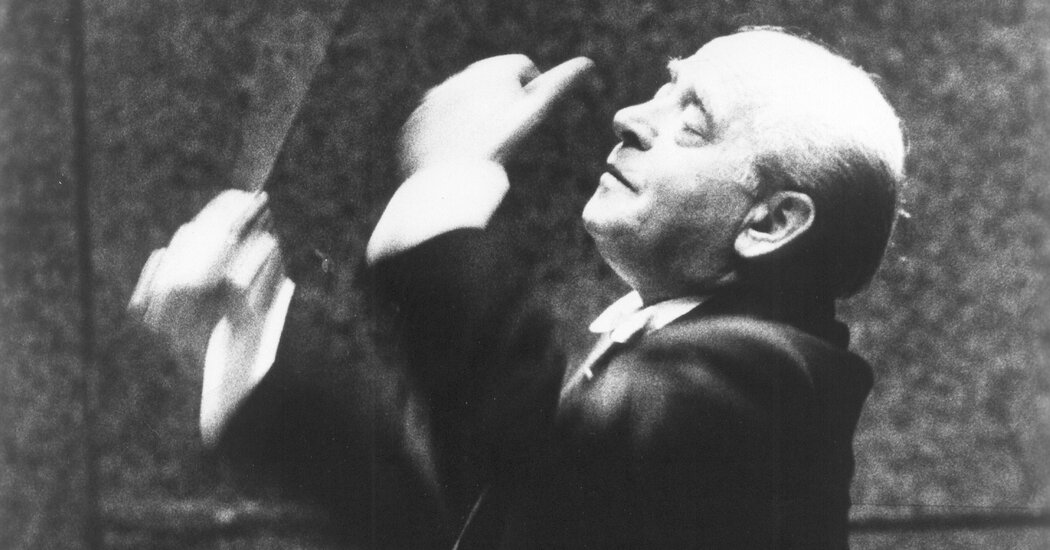 Something odd happens when you reach the 28th disc in Sony’s enormous, enlightening, at times exasperating 120-CD box set of recordings by Eugene Ormandy and the Philadelphia Orchestra. The box covers the period when that ensemble was regarded as little short of a miracle — “America’s finest orchestra,” as The New York Times put it in 1954.

For the first four tracks, you’ve been hearing Ormandy and his “Fabulous Philadelphians” slather their familiar sound over Haydn’s Symphony No. 101, their energetic, brisk playing admirably agile in a recording from 1949, despite their signature lashings of full-fat cream in the strings.

Then comes something different. It’s still Haydn, his Symphony No. 92 this time, and it’s still 1949. But the sound is snappier, the proportions more formal, the atmosphere more careful, yet charming for it. Surely this can’t be Ormandy and Philadelphia, and it’s not: It’s George Szell and the Cleveland Orchestra, making a guest appearance on the disc, just as they did on the original LP.

Though both performances are convincing in their own ways, listening to them in succession, you might find yourself repeating the assessment with which history has judged Ormandy.

Ormandy, a stocky, gregarious Hungarian American might have presided in Philadelphia for an astonishing 44 years, from 1936 to 1980 — inheriting a fine ensemble and making it “probably the greatest virtuoso orchestra of all time,” as The Times confirmed in 1964. He might have been the first man to lead an orchestra on television, in 1948, and might have so dominated the record stores that it was claimed that more people had heard his band than any other.

But Ormandy’s undeniable achievements come with an asterisk. For some listeners, his successes were shallow, careless, commercial — whatever interpretive abilities he had dissolving in the same alluring sea of tones. The “Sears Roebuck of musical performance values,” as a critic put it (in admiration), he offered few of the insights of a Szell or Charles Munch — let alone of his idol, Arturo Toscanini.

Even his advocates exhausted the thesaurus entry for reliability, if not mediocrity. “His are a straightforward mind and a straightforward musical style,” Virgil Thomson wrote in 1942. “Honest,” “sensible,” “satisfactory”: Even at Ormandy’s death, in 1985, the adjectives for the defense did not suggest inspiration.

The public loved him; critics, some of them at least, despised him. If you liked him, some thought you unserious; if you hated him, some thought you a snob. Either way, the Times critic Harold Schonberg hoped that history would be kind, writing in 1967 that this “perfect workman” could trust that his “extraordinary craftsmanship and musical dedication” would grant him “an honored place in the pantheon.”

A place in the pantheon? Sure. Honored? Not for me.

Sony’s new set is one of the most compendious efforts at archival excavation that the major labels have yet offered. It speaks to Ormandy’s awkwardly uncertain posthumous stature that so few of these 120 CDs contain performances that have stayed available into the digital era: 152 recordings appear on disc for the first time, and 139 receive their first official release from the original sources. All are remastered, if not all well; each comes in an original jacket.

Yet this fulsome tribute, weighing in at 14 pounds, is far from a complete representation of Ormandy’s vast legacy. There is nothing of his time in the 1930s with the Minneapolis Symphony (today the Minnesota Orchestra), when he took advantage of a quirk in the players’ contract to make that ensemble the most productive in the land. There is nothing of his first six years in Philadelphia, when he made records for Victor that can be heard today on Pristine Classical. There is nothing from the stereo era, evidence of which comes on other, smaller sets.

Six score CDs would represent a lifetime’s work for most (Herbert von Karajan aside), but this box covers less than a third of Ormandy’s career, though arguably its peak, from 1944 to 1958.

Ormandy’s competitors didn’t have his numbers, nor his almost unfathomable range. Szell’s equivalent compendium with the Cleveland Orchestra sticks close to the Central European titans, while Munch’s with the Boston Symphony flourishes in the French repertoire. But with a cavernous memory and a zeal for efficiency that he had cultivated at the helm of radio shows like the “Jack Frost Melody Moments,” Ormandy could go from Albéniz to Yardumian, from his own, tellingly gaudy transcriptions of Bach and Handel to the works of American contemporaries, Philadelphians like Harl McDonald, Louis Gesensway and Vincent Persichetti among them.

If Ormandy was hard to pin down, his fundamental tastes were late Romantic and later. Rachmaninoff and Prokofiev were favorites, and done with aplomb; though there is no Mahler, Bruckner or Shostakovich here, despite his advocacy for all three composers, he made his way through Brahms and Tchaikovsky. Sensitive accompaniments for soloists of the caliber of Rudolf Serkin and Zino Francescatti aside, there is little here of Ormandy’s muscular Beethoven, and his Mozart is limited to one, brilliantly effervescent symphony. He took charge of the “pops” himself, spooning up some oddly sugar-free servings of Lehar and the Strausses, but having glorious fun in Victor Herbert.

Through it all, Ormandy’s interests are about luxuriant sound rather than intriguing interpretation — such a perfect match for the conservative, consumerist Cold War culture that Eisenhower and Nixon sent him and his orchestra to Europe, the Soviet Union and China to represent.

Listen for much of a structure, and you hear something more intuitive, a melodic approach to line. That could catch fire in the right piece and on the right day, as in a blistering, ferocious account of Tchaikovsky’s “Pathétique” Symphony from 1952, or in electrifying tapings of Sibelius, a real specialty. But that approach tended not to spark in works that demand a precise ratcheting of harmonic tensions, as in an earthbound Beethoven’s Ninth from 1945-46 and a guileless Brahms’s First from 1950.

What there is, is that lush, legato sound, its flowing phrases stretched over its rhythmic details, a singular approach to what all music should sound like. Indeed, that sound was the interpretation. “The Philadelphia sound, c’est moi,” Ormandy liked to say, taking credit for what was rightly his, but subsuming himself into it in the process.

He was often accused of polishing the Technicolor inheritance left to him by his predecessor Leopold Stokowski, with whom he shared the Philadelphia podium from 1936 to 1938 before emerging as music director in his own right. But Ormandy’s sound was distinct.

Born Jeno Blau in Budapest in 1899, he was named after Jeno Hubay, a violinist his dentist father beat him into emulating. Young Jeno was indeed a prodigy, entering the Royal Academy of Music at 5, joining Hubay’s classes at 9 and starting to teach at just 17.

It was as a soloist that he emigrated to New York in 1921, lured with a fraudulent promise of concerts. And it was as a violinist that he started a new life, becoming the practical musician he became while leading and eventually conducting the Capitol Theater Orchestra — four times a day, seven days a week — in light classics, symphonic movements and silent movie accompaniments. He drew the attention of the agent Arthur Judson, who threw him into a date no one would take, covering for Toscanini in Philadelphia in 1931. Ormandy was immediately appointed in Minneapolis.

“I had an idea of how the violin should sound,” Ormandy recalled in 1980. “When I began to conduct, I tried to get that same sound out of the orchestra.”

The results — achieved through huge arcs of bowing, the richest of vibratos and a taste for rewriting scores to emphasize melodic lines — can still stupefy in works like Strauss’s “Ein Heldenleben,” in a glittering 1954 rendition. But the accusation of vulgarity finds scarce support; Ormandy simply did not take those kinds of risks.

The sound he commanded was huge, but it doesn’t bully, like Karajan’s Berlin Philharmonic; his phrasing can be supple, but it rarely charms like John Barbirolli’s; he could whip up a storm, as in Berlioz’s “Symphonie Fantastique” in 1950, but he would never approach the derangement of accounts like those from Munch. Not for nothing did Virgil Thomson describe the ensemble in 1944 as having an “impersonal, almost botanical beauty.”

The problem, in Sony’s set, is that you can’t really hear it. Columbia, the original label for these albums, was slow to start recording in more than one channel; its technology was never that advanced; and until late in the box the sound is often murky, and sometimes distractingly fluttery. If the handful of remasterings that the exceptional restorers Mark Obert-Thorn and Andrew Rose have brought out on Pristine of some of the same recordings represented here suggest that Sony’s sources had more to give, there is, in truth, not all that much more to be done.

So intense was the Philadelphians’ sound in the flesh that they made other ensembles “sound like reproductions, like gramophone recordings of themselves,” Thomson once wrote. The same applies here. Even ears content with mono tapings prick up going from the constraints of Ormandy’s 1954 “Heldenleben” to the similar one he made in stereo in 1960; the jump makes a crucial difference in a way that was not the case for conductors less obsessed with pure sound.

Even after 120 CDs, then, a full reckoning with Ormandy — and his complete devotion to his Philadelphians, enviable in an age of jet-setting conductors — will have to wait until Sony releases, dare I say, yet more.