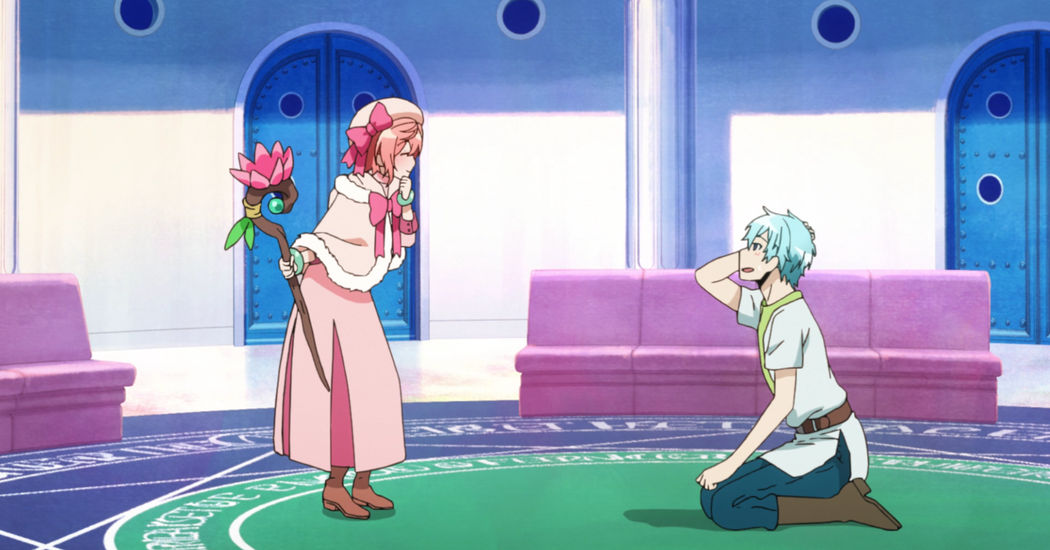 At this point, I’m pretty good at faking my way through social interactions. There are no external signs of discomfort, no indications that I spent the route there debating, Hamlet-style, whether or not to bail. No evidence of the way a post-meeting panic attack can start me on an apartment cleaning spree. I’m notorious for my disappearing acts. And my apartment is always spotless.

The pandemic hasn’t helped; we are so much more tender and vulnerable than before. How do we re-enter society post-pandemic when our social skills have so atrophied?

The question made me recall “Recovery of an MMO Junkie,” a beloved anime rom-com I first encountered four years ago about the struggle of connecting with other people and the ways we avoid or ultimately give in to intimacy.

In “MMO Junkie,” Morioka Moriko is a neurotic 30-year-old NEET (a person “not in education, employment or training”) who abruptly quits her job to opt for days and nights of nonstop computer gaming. She gets hooked to a massively multiplayer online game (M.M.O.) called Fruits de Mer, in which she creates a blue-haired male avatar named Hayashi and joins a guild.

The already introverted Morioka withdraws even more from the real world, building connections with her fellow gamers while still hiding her identity and the details of her NEET lifestyle. When Morioka’s character teams up with Lily, a cute, pink-haired healer, the two anonymous gamers behind the partnership develop real feelings for each other. However, the hidden identities, white lies and miscommunications from the online world bleed into the real world, plaguing Morioka but also ultimately bringing her out of her shell.

I recently rewatched “MMO Junkie” — the 10 episodes of which are available to stream on Crunchyroll and to buy on Amazon — and found Morioka and her romantic adventures as relatable and delightfully funny as before, especially as I look forward to a post-Covid summer. Here’s why I find it so charming.

The Realistic Depiction of Mental Illness

Depictions of mental illness can so often be overblown and didactic. Either the disease is named and gets its own story line, or it remains unnamed but portrayed so narrowly with its one or two most demonstrative symptoms.

In “MMO Junkie” Morioka is content in her isolation; her bedraggled look as she leaves her office in the first episode seems to indicate typical work burnout more than anything else. After all, she was productive — and even accomplished — at her job.

And yet the way she neglects herself — sheltering in sweatpants, letting her hair grow wild, surviving on a diet of beer and premade meals — suggests a problem that goes deeper than a few tough weeks at work. Whether online or in person, she frets over her interactions with others. She mercilessly criticizes herself for saying the wrong thing and compulsively lint-rolls her rug whenever she is drawn into an anxiety spiral.

She never says she’s depressed or afflicted with an anxiety disorder, and yet her behaviors and attitudes are familiar to me, a person who has experienced both. Yet even at her saddest, Morioka is never tragic; she’s funny, smart and earnest. She also just happens to have anxiety.


Join Times theater reporter Michael Paulson in conversation with Lin-Manuel Miranda, catch a performance from Shakespeare in the Park and more as we explore signs of hope in a changed city. For a year, the “Offstage” series has followed theater through a shutdown. Now we’re looking at its rebound.

Clever Use of Rom-Com Conventions

“MMO Junkie” has a delightful sense of humor. Despite her low self-esteem, Morioka isn’t some sad-sack protagonist; she’s hilariously hyperbolic in every situation. A lovable rom-com heroine in the vein of Meg Ryan. Any tiny gaffe, and she’s wailing in misery or jumping to absurd conclusions. When charmed, she blushes and steam comes out of her ears. (Even the episode titles take on her melodramatic attitude; one is adorably named “I’m So Embarrassed I Could Die.”)

The series comfortably moves in and out of classic rom-com conventions going back to the Shakespearean-style farce. No, it’s not quite “Twelfth Night,” but there is plenty of gender-swapping and confusion about identities. With that comes clever commentary about the gender stereotypes and performances we often encounter in these kinds of courtship comedies. (In one episode, Morioka, as the blue-haired Hayashi, tries to concoct a romantic gesture but comes up with only heteronormative clichés that another guild player criticizes, saying, “What’s up with your image of masculinity?”)

Maintaining the momentum in a farce can be difficult, especially throughout a whole season, but “MMO Junkie” takes full advantage of dramatic irony and other rom-com standards like love triangles and lots of serendipity. (“Coincidences like that don’t just happen,” one character repeatedly declares in the series. But apparently, when it comes to love, they sometimes do.)

An Incisive Message about Relationships

More than its relatability, and more than its priceless humor, the element of “MMO Junkie” that draws me back again and again is its enormous heart.

“MMO Junkie” is romantic without being inane. In telling the story of Morioka, a woman who is smart but insecure, and of her crush, who is lonely but lacks the confidence to change that, the series strolls to a satisfying conclusion that also makes a statement about what true partnership should be. In the end, Morioka finds an internet love who is not her missing piece or her other half, but the stitching that holds the parts of her together — a partner who brings out her best qualities and knows the fabric of her inside and out.

In the most sincere terms, “MMO Junkie” says that despite or because of all the self-sabotages, delusions, detours and other misdirections we bumble through daily, the most mundane and most extraordinary thing we can do in this life is connect with another human being. And it isn’t simply about finding a partner; it’s more about finding love in kinship and community, in shared ideas and values — whether it’s art and politics or lifestyles and hobbies like M.M.O. gaming.

Who are we in isolation? Over the past year, it is a question the pandemic has forced many of us to confront. In the times when my loneliness settled into my chest like a chronic ache, I withdrew like Morioka. And although I’m so hungry for the days of drinks and dates and dance clubs and the unmasked faces of strangers and friends, I also dread the hassles that come with communicating IRL.

But summer is coming, and we have vaccines and a growing sense of hope. Like Morioka, we’ve been isolated for so long that when finally we step back into the world of lovers and strangers and friends, we might be a bit unsteady on our feet. But, as “MMO Junkie” suggests, it’s worth stumbling ahead anyway — and seeing what people you meet along the way.