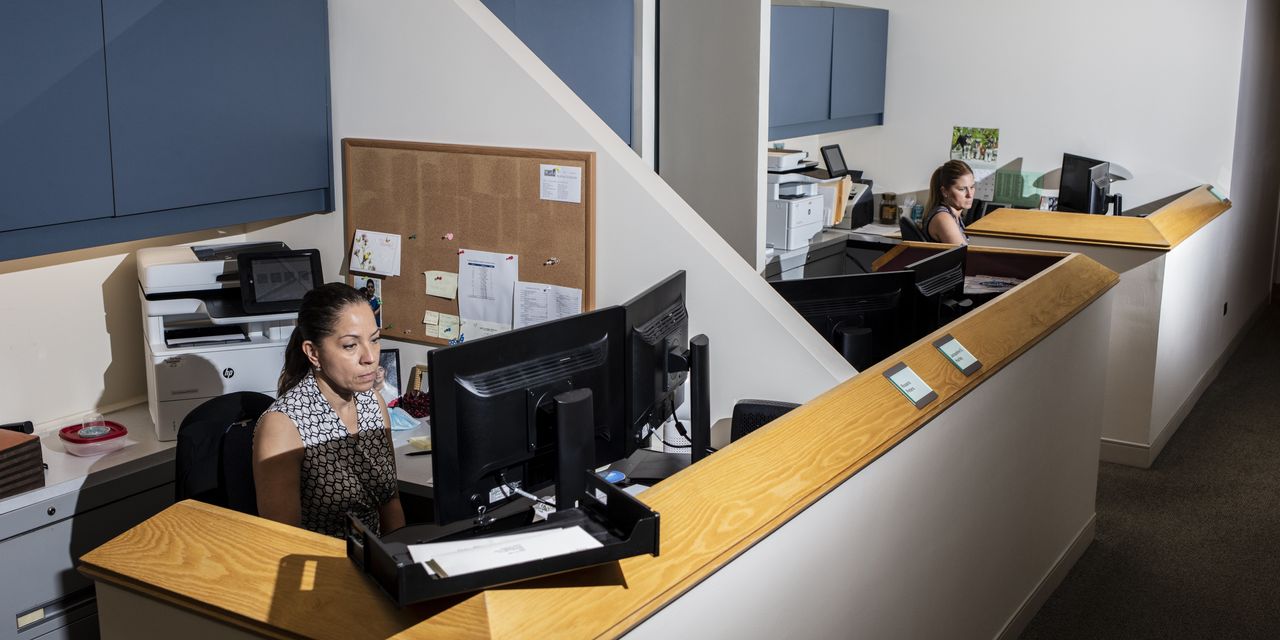 Office towers and nearby businesses in central business districts are missing out on the strong economic recovery, largely because the rise in vaccinations and easing of mask restrictions haven’t propelled most employees back to work.

Fewer than three out of 10 white-collar employees were working at the office on average in 10 major U.S. cities, including New York, Los Angeles, San Francisco and Washington, D.C., according to Kastle Systems. The nationwide security company monitors access-card swipes in more than 2,500 office buildings in cities across the country.

As of Monday, an average of 31% of office workers had returned to the workspaces they occupied before the Covid-19 pandemic, according to Kastle.

The number of employees who are back in the office has been inching up since vaccines began rolling out in the U.S. In some cases, employees have pushed back on their employers’ requests to return. In others, companies are waiting until the fall—when vaccinations will be even more widespread and schools will be in session—to more widely reopen offices.

Office workers “are not coming back in force yet,” said

Kastle’s chairman. “Habits that have been formed over the last year and a half are going to take a while to break.”

The sluggish pace of returning office workers is delaying more robust reopenings in cities such as New York, San Francisco and Chicago by extending the struggle of small businesses in mostly empty business districts.

Several factors are making it hard for some businesses to get employees back to the office. Most workers prefer to work from home some or all of the time, according to many surveys, and some are now pushing back when their employers tell them of plans to reopen office spaces.

Some continue to have health concerns, and some don’t want to be vaccinated, as companies navigate whether to mandate vaccinations and allow for some exceptions.

in San Francisco and

& Co. in New York City have started to reopen offices to employees who have been working from home. However, fewer than 21% of workers in those two cities are back in the office, according to Kastle.

Many companies expect the pace of return to accelerate in September when many schools reopen in full, and the summer travel season comes to an end. A survey of employers by the Partnership for New York City, a business group, found that 62% projected their employees would be back in offices in September, up from 45% in March.

But for now, city office towers haven’t experienced the meaningful bump in worker return that many hoped for once the health threats from Covid-19 began to dissipate. The shops and restaurants that rely on office workers as their main customers are left wondering “where are all the office workers,” said James Mettham, executive director of New York City’s Flatiron-23rd Street business improvement district.

Before the pandemic a workforce of about 100,000 white collar workers would commute into the Flatiron area daily. Today most of the office workers haven’t returned, he said.

“Everyone knows full well that unless we’re getting a much bigger chunk of those 100,000 people, it’s going to be difficult to continue,” Mr. Mettham said.

Office return has been mostly piecemeal. Salesforce.com, San Francisco’s largest private employer, began reopening its offices there last month on a voluntary basis. So far only 200 of its 10,000 workers in the city have returned.

The national return-to-work average hit a post-pandemic low of 14.6% in April of 2020, according to Kastle.

said. He said the plan was complicated by finances, politics, health and human nature.

“You have to respect the psychological and emotional pieces of it,” he said.

Throughout the pandemic, a wide gap in office return rate has developed across different parts of the country.

Texas cities have led the pack partly because they are less dense, and workers are less reliant on public transportation. Those disparities have widened even more in recent weeks, as the country has reopened. In Austin, Dallas and Houston the return rate is in the high-40% range, more than double that in San Francisco and New York, according to Kastle.

Part of the difference is “Texas swagger,” said

III, chief executive of Carr Properties, which owns about 4.7 million square feet of office space. The sentiment is, “Let’s get back quick, and get back to normal,” he said.

Are you planning to return to work in an office building? If so, when? Join the conversation below.

plans to start bringing back nonessential workers in North America this summer, though the pace is likely to vary because of vaccination rates, said

Lenovo’s sprawling Morrisville, N.C., campus is in a state that dropped its mask mandate in mid-May. Lenovo’s Canada offices may open later because the vaccination rate has been slower in that country.

Sills Cummis started opening its New Jersey office this month but will wait until July to open in New York because of differences in density and worker reliance on mass transit. “The buildings in the city are higher. The elevators tend to be more crowded. There’s more likelihood of being in close quarters,” Mr. Crane said.

Write to Peter Grant at peter.grant@wsj.com