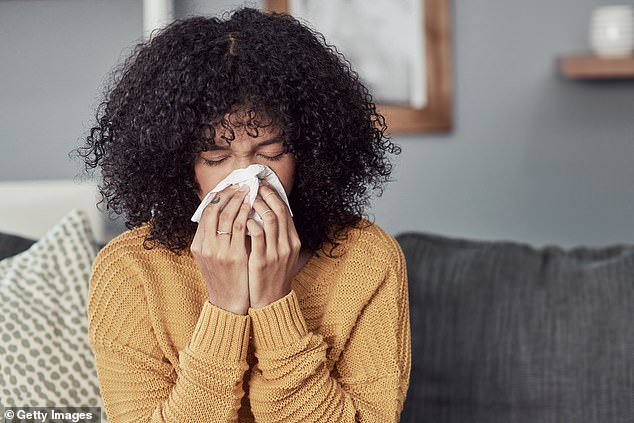 Allergy seasons have been increasingly getting longer and worse for hay fever sufferers, a new study suggests.

They found that the local pollen and mold season has been extended by eight to nine weeks per year since 2002.

The team, from Stanford University School of Medicine, in California, says that d climate change is to blame, with rising temperatures extending allergy seasons. 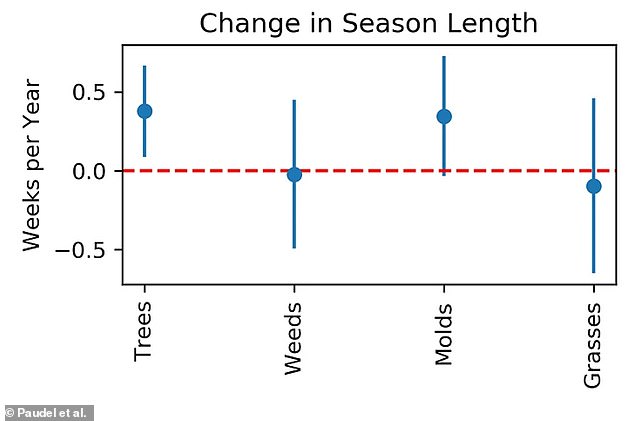 They found that the local pollen (trees, weeds, grasses) and mold season has been extended eight to nine weeks over the last 20 years (above)

‘Climate change is really a problem for health, and we are living and breathing the effects of climate change now,’ said senior author Dr Kari Nadeau, professor of medicine and of pediatrics at Stanford, in a press release.

‘As an allergist, it is my duty to follow the pollen counts, and I was noticing that the start date of the tree pollen season was earlier every year.

‘My patients were complaining, and I would say, ‘This is such a tough year,’ but then I thought, wait, I’m saying that every year.’

Allergies occur when the body’s immune system views a substance as harmful and overreacts to it.

Reactions may be mildly annoying from sneezing and watery eyes to life-threatening such as anaphylactic shock, which is when blood pressure suddenly drops and airways narrow, preventing someone from breathing normally.

Having a pollen allergy means you experience an allergic reaction to a powder found on flowering plants.

WHAT IS HAY FEVER?

Hay fever is an allergic reaction to pollen, a fine powder which comes from plants.

There is more pollen in the air in the spring and summer seasons, when plants are flowering.

The reaction usually happens when pollen comes into contact with someone’s eyes, nose, mouth or throat.

Avoiding grass, cut flowers and smoke can help reduce symptoms, as can drying clothes indoors where pollen is less likely to stick to them.

Because pollen is microscopic in size – less than 0.007 inches – it can travel far distances and is easily inhaled, getting deep into the lungs.

Grass and tree pollen typically is released between April and May while pollen from weeds, like ragweed, comes in June and July.

According to the American Academy of Allergy, Asthma and Immunology, about eight percent of U.S. adults aged 18 and over suffer from hay fever, which is the allergic reaction to pollen.

For the study, published in the journal Scientific Reports, the team looked at  airborne pollen and mold spore data collected by a pollen counting station in Los Altos Hills.

Researchers calculated the concentrations of pollen from grass, trees and weed – as well mold spores – from 2002 to 2019.

Although allergens from more than 100 different species of plants and fungi were identified, the study just focused on the 20 most common.

They found that local pollen and mold seasons have been lengthened by eight to nine weeks.

This means allergy seasons that typically started in April, are now beginning as early as the first week of March or last week of February.

Researchers also looked at environmental data from the National Oceanic and Atmospheric Administration, on temperatures, precipitation and carbon dioxide levels. 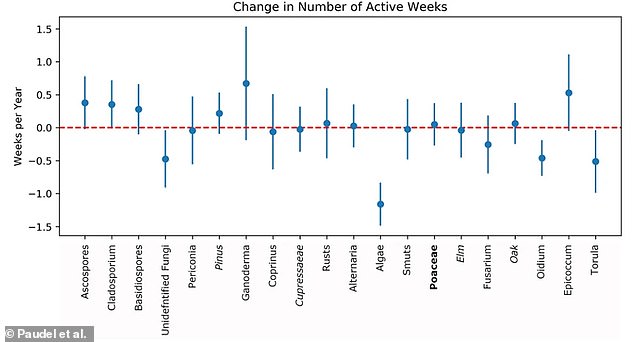 Grass pollen seasons were found to be longer due to heightened summer temperatures and higher mold counts were associated with rainfall followed by drought.

‘It helps patients to know that the reason they’re having more allergies is that pollen is in the air longer than in the past,’ Nadeau said.

‘Patients should follow local pollen counts and not just assume their allergies will start at the same time every year.’

Cocktail of prostate drugs could shrink tumours and cuts deaths by a QUARTER, trial shows

REVEALED: All 92 COVID-19-related deaths in Maryland were among people who were unvaccinated 3 min read

REVEALED: All 92 COVID-19-related deaths in Maryland were among people who were unvaccinated