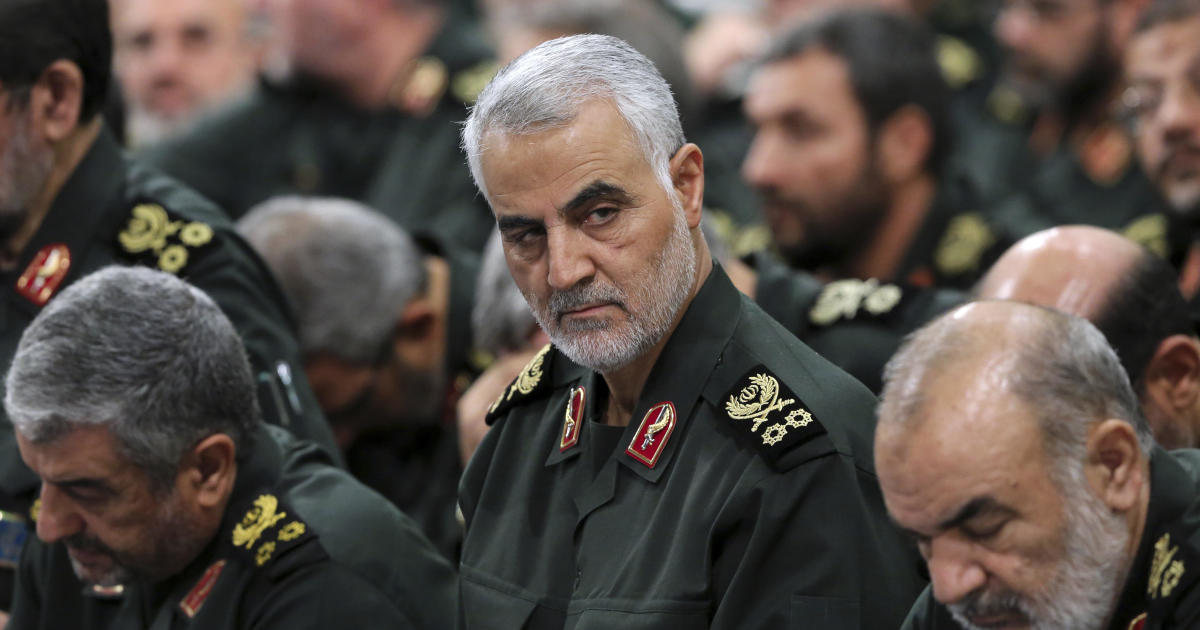 Qassem Soleimani, the head of Iran’s elite Quds military force and one of the most powerful figures in the Islamic Republic, was killed Thursday night in an airstrike in Baghdad, the U.S. Defense Department confirmed. The strike drew a vow of “crushing revenge” from Iran.

In a statement, the Pentagon said President Trump ordered the “decisive defensive action to protect U.S. personnel,” accusing Soleimani of “actively developing plans to attack American diplomats and service members in Iraq and throughout the region.”

Secretary of State Mike Pompeo tweeted on Friday morning that the threat to American lives was “imminent.”

The Defense Department blamed Soleimani for the deaths of hundreds of Americans, and said he was behind recent attacks on coalition bases in Iraq, including one on December 27 that killed an American defense contractor.

“This strike was aimed at deterring future Iranian attack plans,” said the Pentagon statement. Mr. Trump’s only direct response to the attack as of early Friday morning was a tweet with a photo of an American flag.

Abu Mahdi al-Muhandis, the head of the Iranian-backed Popular Mobilization Forces, was also killed in the strikes on an Iraqi base near Baghdad’s airport, an Iraqi official confirmed to CBS News. At least five other people were killed when at least three rockets hit near the airport early on Friday.

Iran and Iraq are furious

Iran’s Defense Minister, Amir Hatami, was quoted by state news agency IRNA as saying the Islamic republic would take a “crushing revenge” for Soleimani’s assassination “from all those involved and responsible.”

The government of Iraq, a vital U.S. ally in the Middle East, was also enraged by the attack on its soil, of which it appeared to have no prior warning. Prime Minister Adel Abdul Mahdi called it “an aggression against the country of Iraq, its state, its government and its people,” and warned that it risked sparking a “devastating war.”

He said the strike was a “flagrant violation of the conditions authorizing the presence of U.S. troops” in Iraq.

U.N. Special Rapporteur on Extra-Judicial Executions Agnes Callamard questioned the Trump administration’s justification for the strikes in a series of tweets early Friday and called them “unlawful” for the fact that others were killed.

Reaction from lawmakers in Washington was split along party lines. Democratic Senator Tom Udall, from New Mexico, called the attack a “reckless escalation of hostilities” that would bring the nation “to the brink of an illegal war with Iran.”

“Tonight’s airstrike risks provoking further dangerous escalation of violence. America — and the world — cannot afford to have tensions escalate to the point of no return,” Pelosi said, chastising the White House for carrying out the strike “without the consultation of the Congress.”

“The full Congress must be immediately briefed on this serious situation and on the next steps under consideration by the Administration,” Pelosi said.

Republican Senator Lindsey Graham tweeted his support: “I appreciate President @realDonaldTrump’s bold action against Iranian aggression. To the Iranian government: if you want more, you will get more.”

Soleimani and the Quds Force

A former U.S. intelligence official described Soleimani as “most experienced guerrilla fighter operating globally,” running operations with Iranian forces and proxy militias in Lebanon, Yemen, Syria, Afghanistan and Iraq. The official described his death as “devastating,” and said the “very disruptive” assassination would likely cause a power struggle in Iran.

In April 2019, the U.S. designated the Islamic Revolutionary Guard Corps, including the Quds Force, a “foreign terrorist organization.” In making the announcement, Secretary of State Mike Pompeo singled out Soleimani.

“With this designation, we are sending a clear signal, a clear message to Iran’s leaders, including Qassem Soleimani and his band of thugs, that the United States is bringing all pressure to bear to stop the regime’s outlaw behavior,” Pompeo said at the time.

Ben Rhodes, a deputy national security adviser under Barack Obama who was instrumental in the 2014 Iran nuclear deal, said there’s “no question that Soleimani has a lot of blood on his hands.”

“But this is a really frightening moment,” he added. “Iran will respond and likely in various places. Thinking of all US personnel in the region right now.”

The missile attack came just hours after Defense Secretary Mark Esper said the U.S. military would be ready if Iran and its allies attempted new attacks like the one this week at the U.S. embassy in Baghdad. That attack left an external reception area charred and battered, but caused no deaths or injuries.

More than 700 Army paratroopers are headed to Kuwait, and as many as 5,000 more paratroopers and U.S. Marines were expected to be sent to the Persian Gulf in the coming days.

While speaking to reporters off camera earlier Thursday, Esper said there were indications militias loyal to Iran were planning further attacks against Americans.

“Do I think they may do something? Yes, and they will likely regret it,” he said.